There may be a number of critics and journalists that like to use their work as a bully pulpit, but I am not one of them. I take no delight in knocking a film down. Every film has a number of dedicated professionals who put in their best effort in hopes of presenting something of value. Sadly, things don’t often work out and no I don’t agree that the airing of a balanced opinion is as disgraceful as many artists contend. Still, I take no pleasure in saying bad things about a film someone spent years putting together.

This time in the Journal, I present three recent genre films. All of them aimed to capture that spark and all of them saw it fizzle right out of the gate. 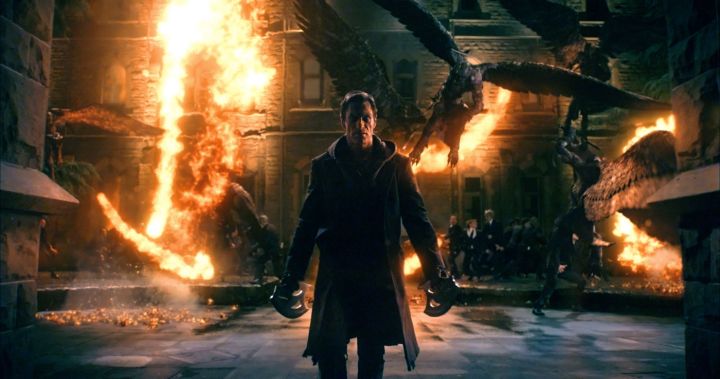 I, FRANKENSTEIN (2014) – This film picks up right after the death of Dr. Frankenstein and wastes no time screwing everything up. The monster (Aaron Eckhart? Really?!?) buries his deadbeat dad and is immediately set upon by a swarm of demons. He is saved by a band of gargoyles that look like humans who just stepped out of a Hot Topic, because Hollywood. The gargoyles are a religious order sworn to vanquish demons that seek to take over the world. The monster, now called Adam, refuses to join the them but spends the next few hundred years “descending demons” (cue eye roll) in the name of virtue. Flash forward to modern day where Adam discovers a plot by a demon billionaire (Bill Nighy! Oh my God, what’s happening?) to create his own legion of monsters from the notes of Dr. Frankenstein.

I, FRANKENSTEIN is completely ridiculous. Though, I have to admit there was a format where it could have all worked. That format would be television, where genre efforts are not only doing quite well thank you, they also allow you to build characters and take your time before the next bombastic set-piece. I, FRANKENSTEIN the movie is having none of that and moves at such a dizzying pace that every minute brings some new form of nonsensical gibberish. The film is so poorly written, you can almost picture Eckhart and Nighy sympathetically embracing one another between takes, as if to say “Don’t worry. It will all be over soon, and everyone will forget we were ever in this abortion.” The Worst.

SIN CITY: A DAME TO KILL FOR (2014) – When SIN CITY was released back in 2005, it was a breath of fresh air. Forget getting the comic book right, this was the comic book translated to the big screen, stylishly blending the art of the book with a unique visual approach. It was a wild and audacious experiment. And maybe that’s why the sequel doesn’t work. The experiment has already happened and what we’re left with is stale leftovers.

Like the first film, SIN CITY: A DAME TO KILL FOR also deals with three stories from Frank Miller’s series (four if you count the pre-credit sequence, which I don’t). How these are handled is a bit different. We get the intro to two stories before diving into the third story, which takes up much of the film, only to return to the first two later. If it sounds like this makes for a smoother experience, it doesn’t.

The original SIN CITY is still great, even if it doesn’t play as well as it did years ago. The problem is no fault of the film itself. It’s that it inspired films to try a similar visual style, so it’s no longer quite as fresh as it once was. Watching the original SIN CITY for the first time in years, I was shocked how much the show now reminds me of a modern-day cable television series, a field that has exploded in the last decade.

Still, SIN CITY could always count on fresh storytelling and some great performances. A few of those actors return in A DAME TO KILL FOR. Mickey Rourke is here, but regulated mainly to the sidelines, he doesn’t get nearly the spotlight he did in the first film. Jessica Alba and Bruce Willis both return for a sequel to the “That Yellow Bastard” segment. Also the “Dame to Kill For” story is itself a precursor to “The Big Fat Kill,” which was featured in the first film. All these stories occur in the same time frame of SIN CITY 2, despite the fact that certain segments have people who died in the last film reappearing, even while the film acknowledges it takes place four years after the 2005 original. No offense to Josh Brolin, who turns in a serviceable but forgettable performance here, but was Clive Owen really not a possibility? Of all the actors in this one, it was two newcomers that made an impression: Dennis Haysbert and Christopher Lloyd, whose cameo is the most three-dimensional part of the whole damn show.

And that’s another thing, the stories don’t play nearly as well as they did in the first film. I could say that the stories aren’t as good themselves, if I hadn’t actually read them beforehand. Rather, it just seems empty. As if Rodriguez did everything he wanted to do with that first film and here he was just repeating himself. Perhaps this is the real reason this sequel comes out nine years after the original – not because they needed time to get it right, but because the people in charge weren’t as inspired to try. Awful.

The Sinbad stories are ripe for great adventure, which is why Ray Harryhausen brought three such projects to the screen over a twenty year period. This story, involving the kidnapping of a princess by a powerful magician, is one that definitely has those classic fantasy adventures in mind. SINBAD: THE FIFTH VOYAGE sets its action amidst of myriad of digital filters. All the same, our hero encounters scores of giant monsters that seem ripped from Harryhausen’s sketchpad. Most of the monsters are done in stop motion and the filmmakers have no problem showing their lack of mobility. The aim is to impress but also to recall a simpler time, when fantasy adventure didn’t take itself so seriously and only sought to leave the viewer smiling.

Another thing SINBAD does is to cast these classic stories of Arabia with Middle Eastern actors. Finally! Our Middle Eastern thespians are terribly undervalued by Hollywood and Sinbad has long been played by a long line of talented but very white actors. One is also reminded of THE 13TH WARRIOR where the Spanish actor Antonio Banderas was cast as an Arab because that was as close as Hollywood came to a star who matched the complexion of the character. And of course, it was no match at all.

SINBAD seeks to remedy this and no wonder. Sinbad is played by Shahin Sean Solimon, who also writes, produces and directs. It’s an auteur project, one with its heart in the right place. But boy, is it ever a mess.

The acting is cringe-inducing and even Solimon’s lacking performance is one of the better ones the film has to offer. The script is severely rushed, with the hero and villain squaring off before barely an hour has passed. While we get a number of potentially exciting action sequences, character development is left in the dust. Sinbad’s crew, who he thinks of as family, is so nondescript, we never feel any sense of peril or consequence when they have a much worse mortality rate than our hero. The script has a choppy and non-sequential aspect that makes the film feel like a much longer piece edited down to a fraction of its length.

I admire everything Solimon was aiming for. SINBAD: THE FIFTH VOYAGE is a film full of good intentions, but little else. Disappointing.

One thought on “SCOTT’S FILM GEEK JOURNAL: A World of Gods, Monsters and Misfires”