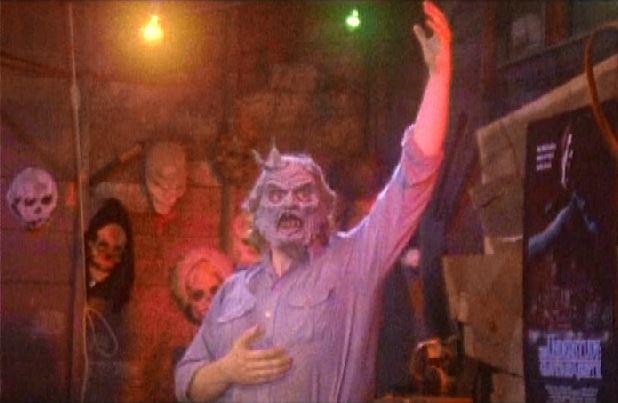 I get it. I don’t like it when people try to downplay the spooky aspects of Halloween either. It’s not a holiday for church socials. And to the politically correct out there, I’ll tell you where you can shove your “Fall Festival.”

Still, Halloween is an actual holiday. “Hauntedween” is not. But don’t tell that to the makers of this film, appropriately named HAUNTEDWEEN. Not only is that the title of the film, it’s also the name of the event the frat boys and southern gals are celebrating.

Maybe it’s a regional thing. HAUNTEDWEEN (or HAUNTED-WEEN, depending on which website you wind up on) was made by a number of college students in Bowling Green, Kentucky. It’s populated by their friends and various townies and much of the film seems to have been made with the premiere in mind. I’m talking about the big screening that would be covered by local news, the one where all the townies can point to the spot where they wander on screen. This gives the film an unmistakable charm, making it seem like a local production that broke out wider than anyone could have anticipated.

Young Eddie Burber wants desperately to work in the family funhouse. The folks say he’s not old enough to work the spookshow and besides, Eddie seems a little too much into it. He breaks in after hours and so does a little girl. Well, let’s just put that in quotes – “little girl.” I don’t know how old this kid was and perhaps I’m exaggerating, but she sure looks like one of those rare twenty year-old eight year-olds to the naked eye. Nevertheless, Eddie has a kid looking for a good scare. He delivers, chasing her around the closed-up place. But faster than you can say, “watch your step,” the kid impales herself on an exposed piece of jagged wood.

That’s a whoops, but so far the fault seems mainly with the unsafe conditions of the funhouse. For reasons unknown to anyone but Eddie himself, he then beheads the little girl. Why? What was at first a tragic accident has now turned into the mutilation murder of a child. Eddie’s family takes him away so that the authorities can’t catch up with him.

Years later, we see the now grown and buff Eddie Burber, though his face remains hidden from the camera. His mother, who I assume is his last living parent, dies of a heart attack. Instead of phoning the police, he tosses mom’s body in the back of his van and decides to return home. I guess this is just Eddie being Eddie.

It’s then that we get to meet one of the most fun-loving, sweet-natured and diverse fraternities you’re likely to come across. Most of the frats I have encountered – and yes though I never joined, there was a period where I socialized with quite a few – didn’t look like this. And that’s a shame because aside from a few jerks in their ranks, they’re a pretty laid back bunch. Yes, there’s lots of beer. Yes, there’s lots of cruising for sex. But it never seems to go into that weird, rapey, binge-drinking netherworld you see in many of these films, or for that matter on the nightly news. They just want to have a good time and that mostly consists of clowning around rather than raising hell. There’s also a more diverse cross section of young people than you’d usually encounter in middle America. You have jocks, brains, preppies and assorted townies. Naturally, they’re about to lose their charter, thanks to their inability to pay even the most meager fraternity dues.

Their problems seem solved when they get to host their “hauntedween” event at the old Burber House, which has become one of those places spoken of in hushed whispers. Posing as an alumni, Eddie slips the keys to Hanks (Brad Hanks), easily the most absent-minded and stereotypically hickish dude in the frat. Not that the rest of the crew are brainiacs. They never investigate who this person was, how he had the keys or whether there is any legitimacy to their invitation. So, full speed ahead. Let’s build a funhouse and make some cash.

But unbeknownst to the brothers, Eddie decides to add his own addition to the house – a final “Kill Room,” in which his abducted victims are slaughtered to the cheers of an ignorant audience.

HAUNTEDWEEN would have found itself in the “win” column, if it didn’t take so long for things to get moving. One of the problems facing films of the 1980s and 1990s was that many filmmakers had to make their films fit into an 85-90 minute running time for cable television and the international market. For many films, the running times were longer than the film warranted. In truth, there’s only about an hour worth of film here. Worse yet, Doug Robertson and Kurt Andrew Swauger don’t seem to have the ability to pad the running time with anything entertaining. Instead, we get a lot of comedic shtick, much of it from the clownish but terminally unfunny Brad Hanks.

We also get a romantic subplot involving the fraternity head Kurt (Brian Blakely) and his girlfriend, Sally (Leslee Lacey). The main problem with this storyline is how the Sally character is written. She thinks Kurt spends too much time with the fraternity and would like more of his attention. Fair enough, so Kurt does start to spend more and more time with Sally, giving her the attention she has been lacking. This is still not good enough and she becomes angry that Kurt doesn’t give her all of his attention, leading to some arguments in which Sally is probably unintentionally cast in an unflattering light. Sally then breaks up with Kurt and immediately makes a play for his best friend. She then confronts her now ex-boyfriend, angrily demanding to know why he’s been avoiding her.

Jesus, Kurt. Run. Run far, far away. Between Sally and Eddie Burber, I’d rather deal with Eddie. He may be a psychotic killer, but at least he’s consistent.

The good stuff in HAUNTEDWEEN does come, but only after an interminable wait. Instead, we get a lot of indulgent clowning from a group of well-meaning people who seem to think their close-knit circle of friends is funnier than the rest of us do. It’s a charming film that would have worked better with a shorter running time. That may have not been an option, which is fine. But if you can’t go short, you can at least go long with material worth caring about.  Disappointing. 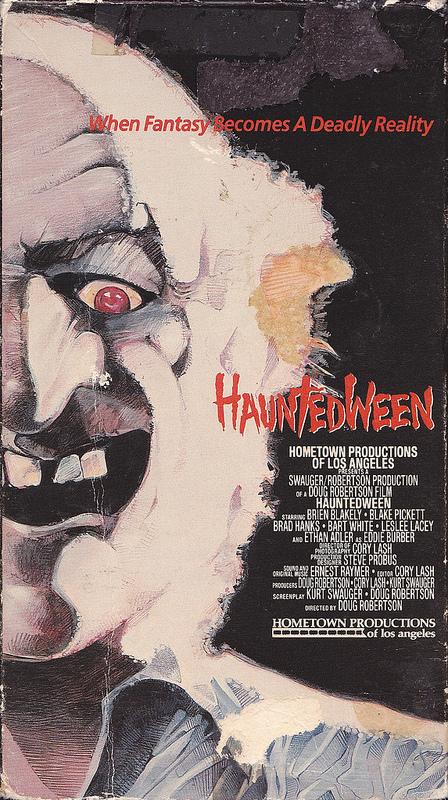