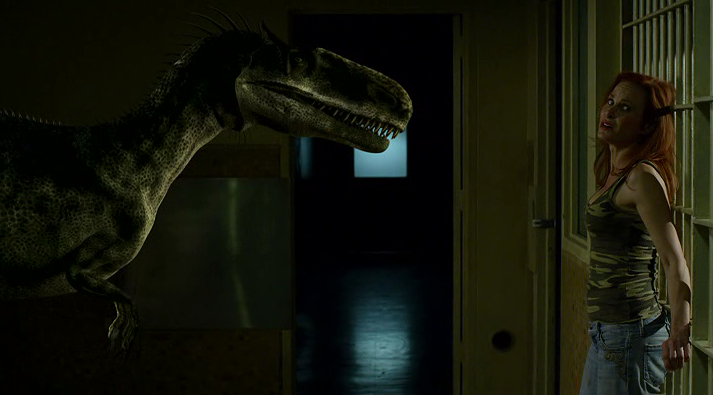 “Take me down to Jurassic City, where the dinos are green and the girls are pretty.” Yeah, I admit it; I’ve been singing this in my head for the last twenty-four hours and giggling. But it turns out that JURASSIC CITY has more than this to make you smile.

The film opens up at the M1 Command Center, where Dr. LaFranco (Vernon Wells) is experimenting with dinosaur DNA. The last twenty plus years of cinema has taught us that this is never a good idea, and it certainly isn’t very comforting that the building is located right in Los Angeles. But though the film isn’t clear whether M1 is a government installation or a private company with some Blackwater-level private security, they’re still trying to reintroduce dinosaurs for whatever reason.

A raptor gets out of its cell and incidentally, you have to appreciate a movie where dinosaurs are kept in cells. This puts the entire complex into lockdown, even after the threat is contained. LaFranco wants to make sure everything is safe and that means diverting another shipment of raptors due to arrive at the facility that night. In other words, they aren’t actually breeding dinosaurs at M1, just housing them in cells that obviously aren’t doing the trick.

The raptors are instead shipped in armored trucks. It is one of these trucks that is intercepted by the dedicated Capt. Talbot (Jack Forcinito). He escorts the shipment to a maximum security prison so they can be watched over until the coast is clear. The warden (Ray Wise) doesn’t know what’s in the containers and doesn’t like the idea of having mysterious guests at his jail, especially since the prison is already housing a Richard Speck-like serial killer (Kevin Gage) for the time being.

Also not thrilled at the prospect of spending the night in stir are a trio of sorority sisters, including a bitchy ice queen (Sofia Mattsson), her dedicated hanger-on (Kayla Carlyle) and our reluctant and diminutive heroine, Pippi (Dana Melanie). Yes, I swear to God our heroine is named Pippi. But don’t let her size fool you. Everyone else seems to count her out and she seems like the one person clever enough to make it out of this film in one piece.

Capt. Talbot is called away when there is another security breach at base. As he goes off to hunt a raptor that is munching on bikini girls in Jacuzzis, he leaves guarding duties up to his second-in-command (the great character actor, Robert LaSardo). Naturally, the raptors escape and run loose in the prison. Right away, they take out a good portion of the prisoners and guards in a massive slaughter full of CGI blood and gnashing teeth.

You’d think they would be full after chomping down this orange-uniformed smorgasbord. But these raptors are always hungry and with the security systems malfunctioning, they have the run of the place. It’s up to our previously-mentioned ensemble, which gains a few new members (including the great Monique Parent), to try to escape the nimble raptors, who are always hunting for their next meal.

As I write this, it’s February 2015 and millions of people are anxiously awaiting JURASSIC WORLD, which is to be released this summer. And I admit there are some interesting things in the few scattered teasers I’ve seen so far. But for the most part, I’m perfectly happy with JURASSIC CITY (originally given the more accurate title JURASSIC BLOCK). The Spielberg production is sure to have state of the art special effects, because let’s face it they’re paying for them. But ambition and moxie go a long way with me and JURASSIC CITY has it.

I have stated before that we are living in a golden age of B-movie monsters. Hollywood has all but forgotten about any beasts that aren’t human and even a lot of indie horror is wrapped up in its own self-importance so it’s the same old parade of serial killers for them as well. We get the occasional ghostly horror, which allows smug producers to call their films “supernatural thrillers” or zombies because lord knows we haven’t seen enough of them lately. But if you’re looking for good old fashioned cheap thrills, the kind that features dinosaurs, killer sharks and other assorted monsters, you will have to look in the same place that has provided entertainment for the masses for so many decades. And that is to the exploitation film, the B-movie, the last great bastion of cinematic entertainment.

JURASSIC CITY doesn’t reinvent the wheel. It delivers lots of action and a fun storyline that often defies even the most basic logic. Things get more and more ridiculous until a final twist that ultimately doesn’t make a lick of sense. And I say bravo for that. There are some out there who turn up their nose at such things and derisively call these films “bad movies” or “guilty pleasures.” The joke’s on you, hipsters. If the film set out to entertain and does so, it’s not a bad movie. As for the rest, I point you to a personal motto of mine – I don’t have guilty pleasures. I have pleasures.

JURASSIC CITY is a cheesy film that is neither the best B-movie I’ve seen in a while nor is it the worst. Sean Cain does a good job in the director’s chair and I enjoyed Mario Salvucci’s score, which at times recalls John Carpenter’s THE THING. The cast does a fine job with the material and the interplay between characters is quite good. This is even true in some of the most out there scenes, including a flies-and-honey argument that goes hysterically off the rails. It’s a fun bit of nonsense with some major ambitions, especially towards the end.

JURASSIC CITY is exactly what I needed and exactly the reason I keep coming back to films like this.  Recommended. 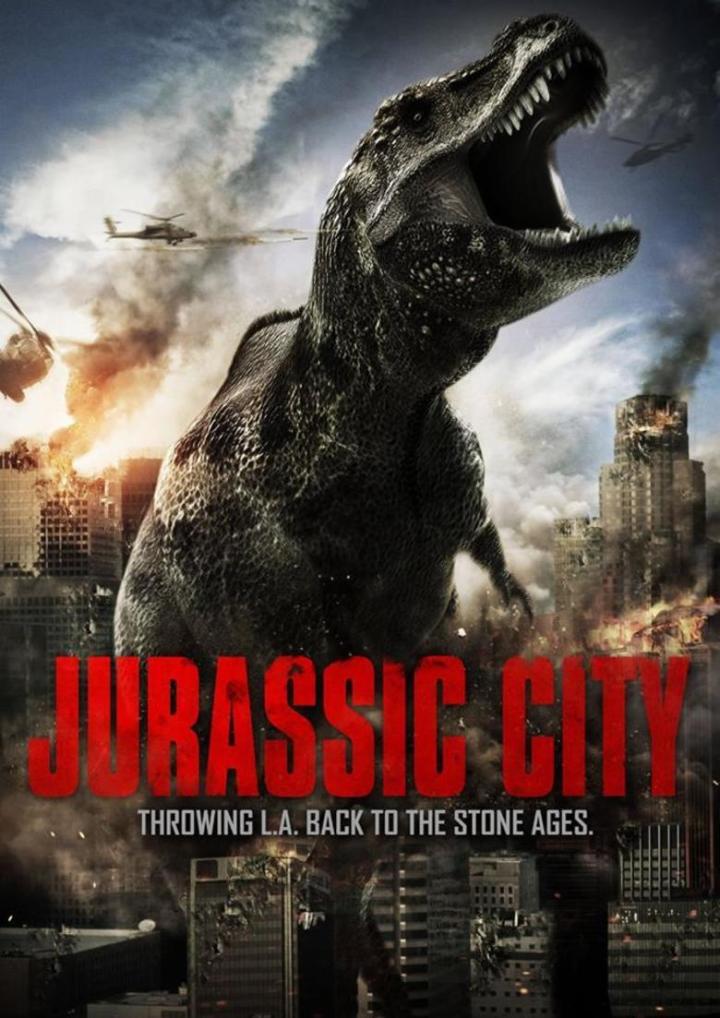