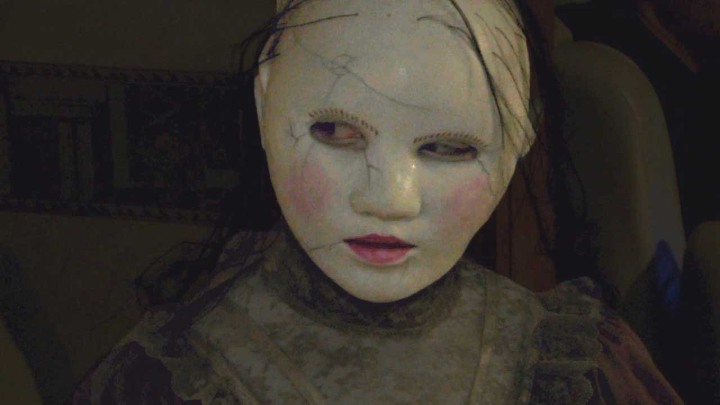 Maybe I’m just going to the wrong haunted houses. I mean, I love haunted houses. I love the whole atmosphere of them. I love lining up with people and venturing into a maze of terrors where you get the wits scared out of you. I just wish there was more of it.

I guess I should mention that the big attraction for haunted houses where I live is the Halloween Horror Nights at Universal Studios Florida, an attraction which costs much more than your standard attraction but also promises so much. And yet, what they deliver is long waits in line which culminates in a three-minute trip through each house (if you’re lucky). You always get the impression that they’re trying to usher you through as quickly as possible so they can admit the throngs of other rubes. It’s a conveyor belt of corporate “boo.”

Apparently, the real fun is in the independent haunted houses, and I’m not talking about the ones at your local Episcopal church. THE HOUSES THAT OCTOBER BUILT explores the nature of “extreme haunts,” haunted attractions that always go a bit further to get a good scare out of whoever dares show up.

The film uses the found footage format to tell the tale of your group of typically ill-fated people. Found footage is a bit of a problem for me. I’m not against the subgenre as a whole. I’m one of the horror fans who still sings the praises of THE BLAIR WITCH PROJECT and would likewise recommend films such as STRAWBERRY ESTATES, GHOSTWATCH, [REC], TROLLHUNTER and of course the original CANNIBAL HOLOCAUST among others. But there is quite a bit of oversaturation going on of late. If you look at the examples I cited, you will note that each of those films did something different with the format. But because there are less technical constraints on independent producers who choose found footage over traditional narrative, too many ape whatever came before. Lots of shaky camera work where you don’t see what’s going on and lots of inane prattle leading up to a predictably disappointing climax.

But THE HOUSES OCTOBER BUILT uses the format quite well. It purports to show the video footage shot by a group of friends, but also by the alleged members of a shadowy group that stalks them. The film focuses on a group of friends who agree to a cross-country road trip when one of them starts documenting extreme haunts in the days leading up to Halloween. Much like in BLAIR WITCH PROJECT, all the principals play themselves and much like BLAIR WITCH, you shouldn’t feel bad that these people didn’t actually befall some horrible fate – seriously never understood that about some of you.

As the group visits various extreme haunts, we get an interesting peek into this subculture. There are interviews with several actors in the attractions and we get to see what makes these haunts so much more genuine than Florida’s multimillion dollar installations. The film also intersperses several genuine news stories about controversies that have hit haunted houses over the years. HOUSES shows us glimpses of everything from rural attractions to a haunted strip club – an idea so brilliant, I’m amazed no one put it into practice before.

But through it all, the friends also stalked by a group of people who seem to take umbrage with them filming their exploits. These people could also be part of what is rumored to be the most extreme haunt in the United States. Called Blue Skeleton, it is allegedly a traveling haunt that offers something more extreme than anyone else. Only thing is that no one is sure they exist and any reports of what goes on are hearsay.

Horror fans are used to having to deal with a lot of filler before we get to the good stuff. In everything from supernatural horror to slashers, there’s a lot of set-up but also precious little character development which often makes the first acts of many shockers feel like padding. I know, it’s a blanket statement. But we all know that most of the horror flicks that get released are guilty of this crime and we usually don’t talk about it in any depth.

With found footage films, that padding is typically doubled. And since most of these films rely on improvised dialogue, that means a lot of the awkward stammering we deal with in real life but that we don’t necessarily want reflected in our art. This happens in HOUSES OCTOBER BUILT as well, but to a much lesser degree than most films in the subgenre. The locations change regularly and the characters are actually endearing. Moreover, the story is kept moving as these strange shadowy figures seem to be following the group around. The tension progresses at a decent rate, making this one of the better uses of the found footage format.

It also helps that the film has a sense of humor and still manages to be genuinely creepy. Sure, THE HOUSES OCTOBER BUILT falls into some of the same trappings as many found footage films. But it comes out looking far better than most of its peers, and I’d rather watch this than WILLOW CREEK any day of the week.  Recommended.