It’s another installment of Scott’s Film Geek Journal… but actually, it’s a lot more than that.

Instead of just another random selection of films, this actually marks the first installment of an ongoing series yet to be named. I will be looking back, 35 years to be exact, at the films of the 1980s. Each week, I’ll share some of the films that opened on that date in various spots around the country, looking at them with fresh eyes in the 20th century.

This means I will need your help. To gauge accurate release dates, I am going off the listings for Minneapolis and New York City. However, if you have some release date info from somewhere else in the United States, please send it to moviocrity@gmail.com and I’ll take a look at it.

You may notice this series doesn’t have an official title yet. That’s because I’ll be joined in my endeavors by my former Film Geek Central cohort, Jesse Hoheisel. While I tackle the 1980s, Jesse will be going back even further and looking at the 1970s. And believe me; he’s done some painstaking research for this project.

The thing is that both of us are starting from the beginning of Janurary at the earliest year possible – 1980 for me and 1970 for Jesse. But Jesse has a little time before 1970 really kicks into gear. So, what you’re getting is a sneak preview of my end of the series, before Jesse unveils the 1970s on his own site and we give this project a name. From that point on, and every week thereafter, the articles will be linked and you’ll get to see two separate snapshots in time, back when going to the movies was a different experience.

So, what do we have in store this week?…

The year starts slow, as most years do. In 1980, the Minneapolis-St. Paul area had yet to be recognized as a major market. Hence, the Twin Cities were getting several films that had been slowly rolled out across the rest of the country. This includes a saucy sex comedy, one of the most successful independent films of its day and another film that is now regarded as a cult classic. 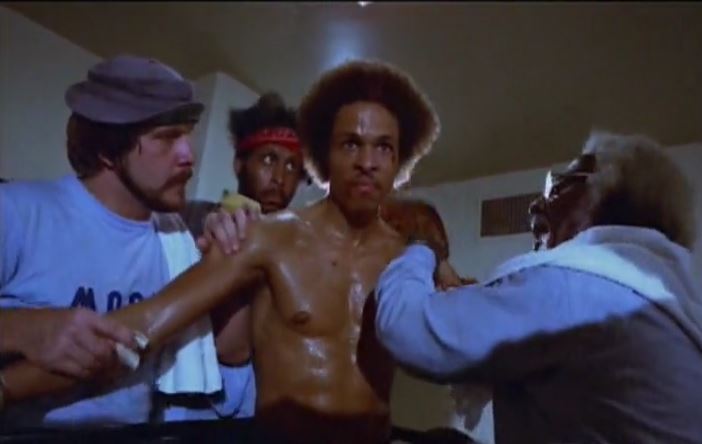 PENITENTIARY (1979) – As PENITENTIARY opens, Too Sweet (Leon Isaac Kennedy) gets knocked out while saving a prostitute from a pair of violent would-be rapists. When he wakes up, the girl is nowhere to be found and he’s looking at hard time in the state pen – in other words, the last place a guy nicknamed “Too Sweet” wants to find himself. Behind bars in a world where survival is key, Too Sweet finds he now has to defend himself from the thugs in prison. Good thing that the prison has a lucrative system for dealing with such rivalries.

After taking down one of the nastiest guys on the block, Too Sweet is transferred so that he can be trained by the elderly Seldom Seen (Floyd Chatman). The old man trains him to be a professional boxer in the matches prison officials have set up. The more Too Sweet wins, the more respect he gets from his fellow prisoners and the more he inspires the wrath of the monstrous cell block tyrant, Jesse (Donovan Womack). It all comes to a head when Lieutenant Arnsworth (Chuck Mitchell – Porky himself!) arranges for a fight that could grant the winner an early parole and sponsorship on the outside. But by that time, Too Sweet’s mind is torn between longing for freedom and thirsting for revenge.

Many prison films offer a violent but sanitized view of life behind bars. True to form, PENITENTIARY is filled with clever nicknames, a few spots of comic relief and some exploitation goodies involving sneaky bathroom trysts. But whereas the films from the Corman camp might keep things relatively light, PENITENTIARY makes no bones about being a dark and gritty motion picture. The fights are not overly-choreographed bouts of grace, they are brutal matches played at lightning speed where two untamed forces have at each other in a flurry of sweat and blood.

Too Sweet tells his jailers at one point that living has become about survival. But he’s only part right. Too Sweet has learned to survive, but he has also learned to reclaim a self-respect he didn’t have at the beginning of the film. He also inspires the innocent Eugene (Thommy Pollard), a character used to being tossed around from cellmate to cellmate. Eugene learns to fight to and is told, “Ain’t nobody gotta be nobody’s property.” For everyone, the fight in the ring becomes symbolic of a fight for the soul.

Kennedy isn’t always the most charismatic leading man, but other performances in the film shine. Chatman is incredible as Seldom Seen, particularly in a painful monologue in which he tells his protégé how he has to believe it’s the rest of the world that’s locked up.

Jamaa Fanaka’s PENITENTIARY was reportedly the most successful independent film of 1979 and it deserved it. This is a tough and uncompromising film that needs to be rediscovered.  Highly Recommended. 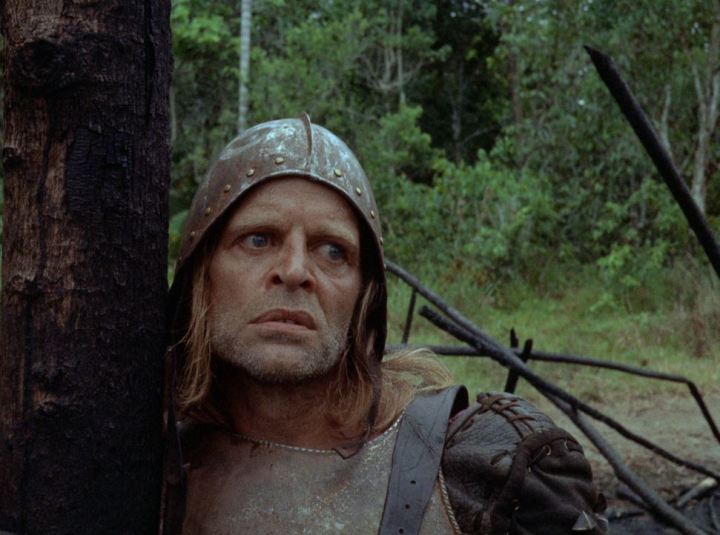 AGUIRRE, THE WRATH OF GOD (a.k.a. AGUIRRE, DER ZORN GOTTES) (1972) – In the 16th century, an expedition of conquistadors makes their way through the Amazon, searching in vain for the fabled city of El Dorado. As hardships continue to mount, Gonzalo Pizarro sends a scouting party down river. Tragedy soon befalls the party, much of it instigated and manipulated by the ruthless Don Lope de Aguirre (Klaus Kinski).

Aguirre eventually has the crew disassociate themselves from Spain and puts a puppet ruler on the throne of El Dorado, a destination which at this point remains a fantasy. But they all know, just as we do, that such formalities are as trivial as they are temporary. No one will obstruct Aguirre’s quest for power and ultimate godhood. The people can see Aguirre’s increasingly violent and erratic behavior, but are too timid to make a stand of any consequence. As the group continues further down the river, Aguirre’s madness only grows.

Werner Herzog is one of our most amazing filmmakers and AGUIRRE may be his best film (though FITZCARRALDO honestly gives it a run for its money). Right away, we’re treated to the image of a procession of conquistadors making their way down an impossibly long, narrow and treacherous path. Herzog does not rely on special effects, instead boldly accomplishing the same harrowing tasks his characters endure. If you see what looks like an impossible shot, it was done by achieving the impossible.

Recalling Joseph Conrad’s “Heart of Darkness,” AGUIRRE, THE WRATH OF GOD is a haunting meditation on madness, power and desperation. Kinski was an incredible actor, as gifted as he was unpredictable. Whenever he’s on screen, you never know if he’s going to exude quiet subtlety or chew a co-star’s face off. He is at his best here, in the first of what would be many collaborations with Herzog. Florian Ficke’s densely-layered musical score thrums on the soundtrack, a calm but off-kilter underscore to an ever-worsening situation for the characters.

AGUIRRE is must-see filmmaking. If you’re waiting to read any criticisms from me, you are waiting in vain. I have seen this film many times already and will likely see it many times more. AGUIRRE, THE WRATH OF GOD is not only a great film, it’s one of the greatest films ever made.  The Best. 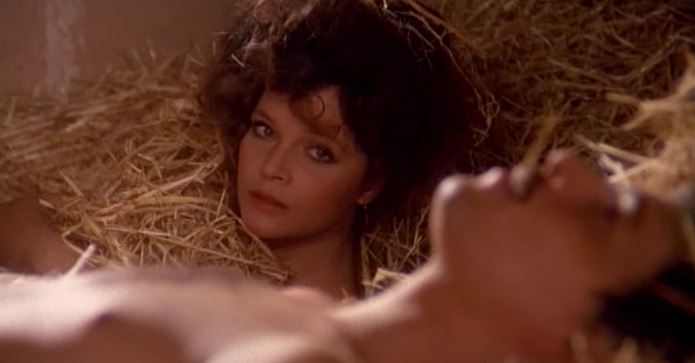 TIL MARRIAGE DO US PART (a.k.a. MIO DIO, COME SOTO CADUTA IN BRASSO!) (1974) – With the influence of the Vatican looming over Italy, it’s no small wonder that the Italian sex comedy became a successful homegrown mainstay. In TIL MARRIAGE DO US PART, Catholic guilt is felt in every scene and is lampooned as a ridiculous and irrational relic of a make believe past.

The setting is primarily Italy and Sicily in the early 1900s. Eugenia di Maqueda (Laura Antonelli, a star of the genre) is a young woman who was raised in a convent and is now about to be married. She is unaware of the ways of the flesh, something that remains true long after her wedding night. That’s because just as her husband (Alberto Lionetto) is about to do the deed, the couple gets a telegram telling them that they are actually brother and sister. Though they keep up appearances, the couple agrees to be celibate, and both feel the pressure. Unaware of her virginity, men start throwing themselves as the gorgeous and naïve Eugenia, with a chauffeur being the lucky winner of her virtue.

Though Antonelli does share all of her charms – and quite charming they are – TIL MARRIAGE DO US PART is not the festival of flesh one might expect. Instead, the focus is on ribaldry as Eugenia makes overdramatic protestations and constantly regrets the stirrings of her libido. Luigi Comencini’s film lampoons the religious traditions of Italy as well as the country’s early flirtations with fascism, illustrated by the couple’s obsession with the poet, Gabriele D’Annunzio.

For the first half, TIL MARRIAGE DO US PART is both funny and entertaining. But alas, it all seems to overstay its welcome as Antonelli continues to act faint and repeat “No! No! No!” every time someone tries to take advantage of her (something which she is actually quite up for, lest you think it’s one of those movies). It’s more than an hour into the film before Eugenia finally gives it up and by then, I had grown a little sick of the routine. Though the film continues to have some bright spots, I found myself increasingly annoyed with Antonelli’s character. And it’s just not becoming when I wind up screaming, “Oh, for crying out loud, sister! Just jump on that thing already!”  Barely Recommended.

One thought on “SCOTT’S FILM GEEK JOURNAL: A Look At the Shape of Things to Come”