I try to confine myself to judging a film for what it is, not what it isn’t. And yet, while watching MORTDECAI, I kept wishing they had done things so differently, that they would have zigged here instead of zagging there. Most of all, I wished that I was somewhere else, engaged in some other activity, please God, anything rather than having to sit through MORTDECAI.

Charlie Mortdecai (Johnny Depp) is the spellchecker’s nightmare of a name given to a man of wealth and regal aspirations, but who is nonetheless a glorified art thief. At the start of the film, he owes 8 million pounds in back taxes to the British government. His wife Johanna (Gwyneth Paltrow) is the only one who can get Mortdecai on track, though even she is having difficulty as he seems more interested in his ridiculous mustache than his financial woes.

While restoring a rare Goya painting, an old woman is murdered and the painting is stolen. Inspector Martland (Ewan McGregor) is convinced that the culprit is a fundamentalist who will somehow use funds from the stolen painting to ramp up his terrorist activities. Being an old rival of Charlie’s and eternal torchbearer for Johanna, Martland is plenty upset when he has to enlist Mortdecai’s services in retrieving the stolen artifact.

As a movie, MORTDECAI isn’t all that civilized, but it thinks it is and that’s the problem. The film flaunts its higher breeding in every scene, giving the illusion that its comedy is somehow more refined than your typical Adam Sandler vehicle. It reminds one of the smart kid who always bragged about knowing the answers to every test question. Only to find that this kid should have been held back several grades and he’s been faking it all this time. Some might say this is the personality of Charlie Mortdecai himself, but I wager that it’s the film that parades this falsehood throughout, even in the scenes where Charlie Mortdecai is not present. Intelligence is no crime and should be celebrated. Being an ass is problematic however, and that’s what we have here. MORTDECAI is one big ass of a movie.

I was initially intrigued to see this film, since I’m happy any time Johnny Depp stars in a film that isn’t a Disney summer blockbuster or directed by Tim Burton. Unfortunately, this film suffers from the same problems as many other recent Depp vehicles. Depp is one of the most talented actors out there, able to inhabit characters in a way few can. Look at the early films he did with Burton, films like EDWARD SCISSORHANDS or ED WOOD. There were understated performances in his oeuvre, such as FINDING NEVERLAND and Jim Jarmusch’s underrated DEAD MAN. He brought a crucial humanity to larger than life characters like Hunter S. Thompson in FEAR AND LOATHING IN LAS VEGAS. But throughout much of the last decade, Depp hasn’t been playing characters, he’s been playing caricatures. He has continued to be successful, but when was the last time you got the sense that Depp was truly challenging himself?

I spent much of MORTDECAI wishing that someone else was playing the lead. Perhaps an actual British comedian would have filled the bill, though this is not about nationalities and all about how grating I found Depp to be. The character of Charlie Mortdecai is an inept clown who gets on everyone’s nerves, but Depp should have been able to make even a man such as this likable. He has done it before. I certainly shouldn’t have spent 106 minutes wishing I could reach through the screen and throttle the protagonist into unconsciousness.

The supporting cast tries to excel where MORTDECAI fails elsewhere. Paltrow balances the right amount of manipulation and strength without coming off as an ice queen. It’s the type of thing that should happen more often, but based on many recent Hollywood portrayals of women, it doesn’t. McGregor is endearing as the lovelorn Martland and Paul Bettany does a good job playing against type as Charlie’s lascivious and fiercely loyal bodyguard.

But the biggest problem with the film is in its assembly. I have seen children stack building blocks with more finesse and precision than the way MORTDECAI is put together. Instead of taking us on a wild, globetrotting adventure, each scene instead seems to be latched onto the last one as if it were a long, lumbering train, inching towards an irrelevant destination, with each ugly car adding to the body but not the worth of the whole.

I was shocked to discover MORTDECAI was directed by David Koepp (though it should be noted he did not write it). Koepp had previously directed a trio of fascinating and underrated thrillers: THE TRIGGER EFFECT, STIR OF ECHOES and one of Depp’s last great films, SECRET WINDOW. Of late, he hasn’t been quite on the ball but I guess I had hoped his ridiculous bike messenger film, PREMIUM RUSH, was merely an anomaly.

MORTDECAI is a bloviating, meandering, infuriating mess of a film. It might not be a film to make my ten worst films of the year, but only because I have grown more and more pessimistic about what Hollywood has yet to throw at us. It wants to recall the great adventurous British comedies of years past, the kind Peter Sellers or Alec Guinness might have had a go at. But those films belong in a museum, whereas MORTDECAI belongs in the dumping ground of January releases.  Awful. 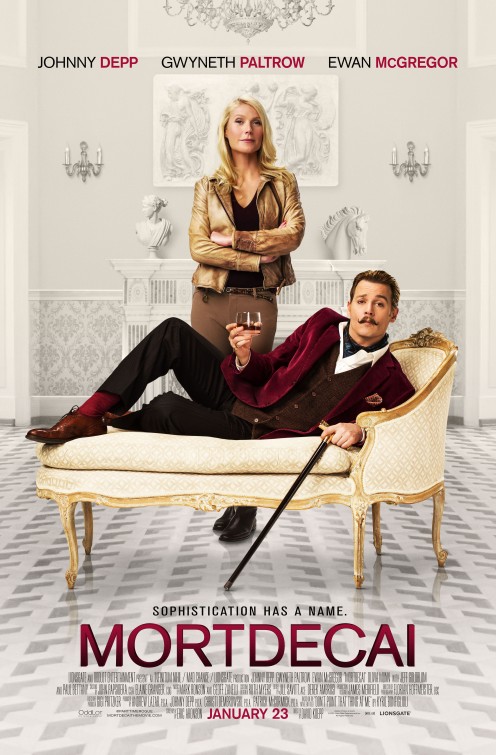