Depression is a hell of a thing. It can make us do things we’re not proud of. Sometimes, it keeps us from doing much of anything at all. I have had many weeks of what feels like pure lethargy. Whereas articles would ordinarily be published mere days apart, now weeks go by without much activity. It even led to some asking if I had given up on the site altogether. No, I haven’t, though I have been preoccupied with other things which meant there wasn’t much energy left over to focus on the very thing that brings me comfort in times of stress, my writing.

I had spent a number of days indoors, trips to the grocery store notwithstanding. The house was becoming a prison, the walls were closing in. I decided that I needed to get out of the house and show my face to the world once again. Unfortunately, the options in my neighborhood were few and far between. My budget was limited and transportation was nonexistent. My destination would have to be a place where my legs could carry me. And so it was that I found myself in the local Cinema Café, jockeying for space with people on family outings and watching PAUL BLART: MALL COP 2.

It really wasn’t until the film began that I realized the previous BLART had come out more than six years ago. At the end of the first film, Blart married the girl of his dreams, Amy (Jayma Hayes). Unfortunately, Hayes was unavailable for this sequel due to her shooting schedule on GLEE. This is the official version of the story and could either translate into a genuine conflict or Hayes nervously saying, “Oh, a PAUL BLART sequel? Yeah, um, no. I have…a thing, a… a filming thing. Oh these hours, so brutal, darn…”

So, the sequel spends its first portion rewriting the original’s happy ending so that Blart can start from square one. Amy files for divorce, less than a week after their marriage. Soon afterwards, Blart’s mother is run over by a milk truck. So, we’re re-introduced to the mall security guard, living a miserable and depressed existence, forgotten and working the same dead-end job with nobody but his daughter Maya (Raini Rodriguez) in his life

Things look up when he is invited to Las Vegas in order to attend a convention of security officers. He checks into the posh Wynn hotel and casino and routinely makes a fool of himself in front of hotel staff and his supposed colleagues. What he doesn’t realize is that a former high roller (Neal McDonough) is trying to recoup his gambling debts by staging a massive art heist, the expense of which would probably match any debts he had accrued.

This is where the film could have been clever. It could have been a PG-rated spoof of DIE HARD set in a casino. There is potential in the McDonough character and one could only imagine someone telling him to give the same performance he gave in STREET FIGHTER: THE LEGEND OF CHUN-LI, only this time it’s okay to play it for laughs. But nothing much is done with the character. And likewise, they never make the most of Blart channeling John McClaine by way of Barney the Dinosaur. The film is constantly restraining itself from committing to anything but the most juvenile bits. It’s the type of film that features a cameo appearance by Mini Kiss, an all-dwarf Kiss tribute band. But that’s all it does. It doesn’t have them take part in any of the comedic bits and you never get to see them play. This is the type of film that feels it’s enough to merely point out the existence of Mini Kiss rather than do anything with it.

It might surprise you to read that I did not hate the original PAUL BLART: MALL COP. I didn’t particularly like it very much either. No, I found the film to be mostly mediocre, which frequent readers of the site will note is something I despite more than a film that is merely terrible. I thought it played it a bit too safe and telegraphed too many of its jokes. But I didn’t have the hatred and vitriol for BLART that most people seemed to and I certainly didn’t think it was one of the worse Happy Madison productions. I could see the heart of the piece and that meant a lot. The film was family friendly and offered a few good chuckles. The Paul Blart character was someone who took his job seriously, because he took people seriously. He knew he drew the short straw in terms of good luck, but he was determined to make the world a better place, even if that meant simply restoring a sense of harmony to the mall food court. I also thought it was a cute joke that a kiosk selling wigs was called Unbeweaveable. I can’t even type that without smiling a little bit. Of the two mall cop-themed comedies that were inexplicably released within a two-month period back in 2009 (the much darker OBSERVE AND REPORT being the other), PAUL BLART was the better of the two.

This is really just another reason PAUL BLART 2 is so disheartening. Not only are the jokes staler and even more telegraphed, the heart is missing. There is a moment when Blart gives a speech that explicitly talks about his duty to help people. It’s a moment that should be inspirational, because I believe in everything he says. And yet, I didn’t believe it coming from Blart. Not this time. Because this time, Paul Blart spends most of the film acting not like a well-meaning doofus, but a complete horse’s ass. The script does call him on some of this behavior, but not all of it, perhaps suggesting an agreement with some of his antics or worse yet, an inability to recognize that the character is now missing any of the traits that could have caused anyone to care about him.

Director Andy Fickman showed some promise in his earlier films. SHE’S THE MAN was a charming teenage version of TWELFTH NIGHT for instance. But he followed that up with a lot of terrible movies. Lately, Fickman has done much of his work executive producing the Disney Channel sitcom LIV AND MADDIE and his newest film doesn’t excel any higher than that level of humor. The film is full of fat jokes and pratfalls that Soupy Sales would have vetoed as being too juvenile. Virtually all of the physical humor is lifted from other films and television shows, and they aren’t always good ones either.

While we’re on the subject, there is one bit that I believe this film may have killed forever. But just in case it hasn’t and some hack writer decides to pursue it once again, I want to lay out a simple truth right now: Segways are not funny. Segways have never been funny. Segways will never be funny. The Segway was a mode of alternate transportation that could have led to big things, but never panned out due to their awkward appearance, people’s reluctance to adopt the technology and odd pedestrian laws that went into effect shortly after the product was introduced. That’s all. I don’t care how many times you show someone riding a Segway, or in the case of these films, falling off of one, what you are eliciting is at best an eye roll and never fits of laughter.

PAUL BLART: MALL COP 2 is a lazy film. The direction is poor. The editing is poor, as can be seen in the tried sequence in which Blart tries to fight off an exotic bird. Even the look of the film is poor, and there can be no excuse for that. While you might not expect a first time cinematographer to be handling the reigns, you certainly don’t expect this ugly little film to have been shot by an Academy Award winner. Somehow, this film which manages to take the glitz of Las Vegas and make it look like a red and brown nightmare was shot by Dean Semler. Semler was the man who shot DANCES WITH WOLVES, one of the most breathtakingly beautiful films of the 1990s. This is a man whose credits include THE ROAD WARRIOR, DEAD CALM, YOUNG GUNS, CITY SLICKERS and MALEFICENT just to name a few. What was he doing on this film, if anything? My only suggestion is that he too got swallowed up by Happy Madison, since he has lensed a number of Sandler’s own comedies. My advice: Get out, Dean. It’s obvious you aren’t doing your best work here.

I wanted to drag this movie out into the street and shoot it. To say that it did nothing to alleviate my feelings of melancholy is an understatement. In fact, it had the opposite effect, an effect I fear it may have on a great many people. Because you can’t watch this film without feeling somehow cheated, like someone has taken you for a ride and dumped you onto the street. The film doesn’t even try to meet the expectations of its audience, as can be evidenced by how many jokes are repeated and how much of the Paul Blart character is missing from this sorry production.

By the time he said “Always bet on Blart,” leering into the camera for a shot clearly intended for the trailer, part of me just gave up. It was as if a piece of me could not find any ray of hope in the universe, no expectation that I would find any sense of humor in this miserable exercise and that piece of me simply withered away. It’s a part that I have been trying to revive ever since and it’s going to happen. But PAUL BLART: MALL COP 2 does the soul no favors. It’s the type of movie that makes going to the movies seem like a needlessly punishing experience. The fact that it is not the complete nadir of cinema is an even more shameful commentary on how low the bar has been set.  The Worst. 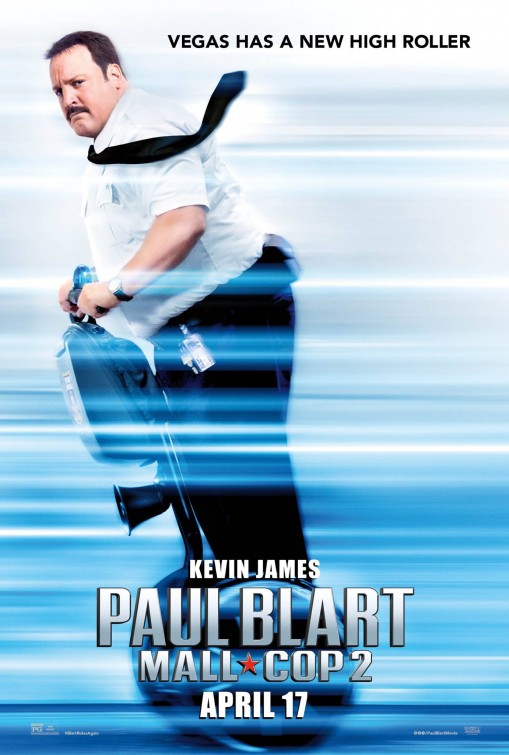 One thought on “PAUL BLART: MALL COP 2, or: The Film That Nearly Broke Me”