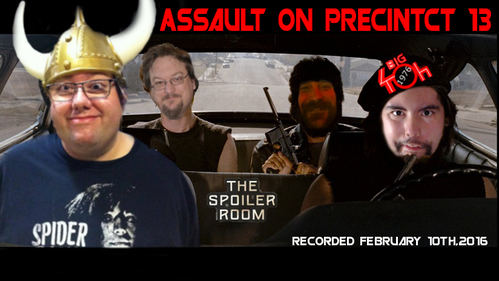 Last year, I was fortunate enough to take part in a series of podcasts spotlighting several films that were celebrating their 25th anniversary.

I didn’t do the best job posting them here.

But this year, I hope to be better and this year, the topics are even more interesting. Mark “the Movieman” Krawczyk is gathering his Spoiler Room crew to take a look at several notable films from 1976. In other words, films that are celebrating their 40th anniversary.

The rest of the crew already did a fine ep on THE MAN WHO FELL TO EARTH. Now, the crew sets their sights on John Carpenter’s cult classic, ASSAULT ON PRECINCT 13.

On this episode, Mark is joined by Gabriel Alcantara, Glenn Buettner, Cole Meredith and myself. So, make sure you have a light as we look back at ASSAULT ON PRECINCT 13!

PLEASE NOTE: This show is intended for listeners 18 and up. Also, the show is called the Spoiler Room for a reason – there are SPOILERS. So, if you haven’t seen the movie, get on that and then come back and listen to us discuss every little plot point.

You can also check out past episodes of the Spoiler Room at Special Mark Productions.