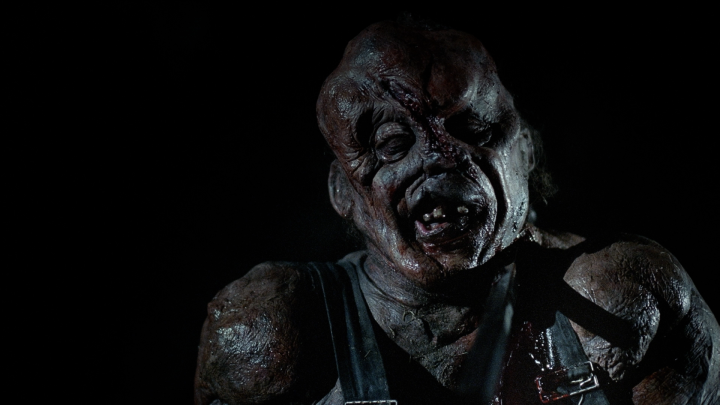 Consider me a convert to the cult of Victor Crowley and a proud supporter of the Hatchet Army. About six years ago, Adam Green’s HATCHET was released. It may have just been a passing curiosity to mainstream filmgoers. But to a die-hard horror fan like myself, it peaked my interest. This was a time when most of the horror films being released to theaters were severely lacking in creativity (not that we’re necessarily in a golden age now). And HATCHET’s poster stated bluntly, “It’s not a remake. It’s not a sequel. And it’s not based on a Japanese one.” It promised “old school American horror” with a sense of humor to boot. I am curious (red).

Now, HATCHET III has been unleashed and it comes time to take a look at the saga of Victor Crowley thus far. How well have Adam Green and company delivered on their promise? 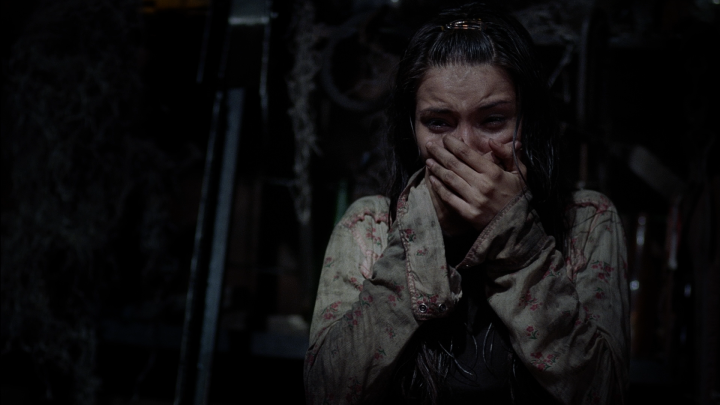 HATCHET (2007) – This first film sets up the story of Victor Crowley. He was a deformed child who lived in the middle of the swamp with his father. After a cruel prank by some kids on Halloween night goes wrong, the Crowley home burns and while trying to get his son out, Crowley’s father accidentally buries a hatchet in his skull. Oops. Since then, it is said that Crowley’s ghost haunts the swamp. But this isn’t the type of ghost that just passes through walls and rattles a few pots and pans. This one tears people limb from limb.

In a pre-credits sequence, two rednecks (Robert Englund and Joshua Leonard) are hunting gators in a Louisiana swamp when Crowley comes calling. A few days later, a bunch of college students are in New Orleans for Mardi Gras. Ben (Joel David Moore – AVATAR) is still reeling from a breakup and is therefore not in the spirit. With his reluctant friend Marcus (Deon Richmond – NOT ANOTHER TEEN MOVIE) in tow, he boards a rickety boat to go on a haunted swamp tour. Also along for the ride is Marybeth (Tamara Feldman), a mysterious girl who is looking for her father and brother, gator hunters who disappeared a few nights prior.

Unfortunately, the boat gets stranded right in the middle of the swamp. More specifically, Victor Crowley’s swamp. Crowley shows up, chopping and slashing at everyone in sight.

Adam Green’s promised goodies get off to a pretty rocky start. The idea was misdirection. For much of the first half of HATCHET, it seems as though we are watching a comedy. And yes, there is quite a bit here that is funny. There is also a bit that’s aggravating as hell. For example, Joel Murray is traveling with a digital camcorder and a couple of pornstars to shoot a video called BAYOU BEAVERS. Whether it makes any sense of not, he has them pop their tops and yell “woo” when in reality, the actresses can’t stand one another. Funny. Unfortunately, Mercedes McNab (Harmony of BUFFY and ANGEL fame) is so spot-on with playing the annoying airhead that you’re begging for Crowley to come and sharpen his hatchet on her bones. Likewise, Richmond’s antics go from being amusing to being cloying pretty quick.

Fortunately, thing do pick up and HATCHET turns into a great horror film midway through, as the sightseers run for their lives, trying to outrun a ghost that is very capable of hurting them. Many slasher films of years gone by usually picked up in their second half while the first was a chore to sit through. HATCHET’s beginning isn’t a chore per se, but we are relieved when the bloodletting starts and Adam Green shows he’s very capable of delivering a few scares. Which leads us to his crowning achievement… 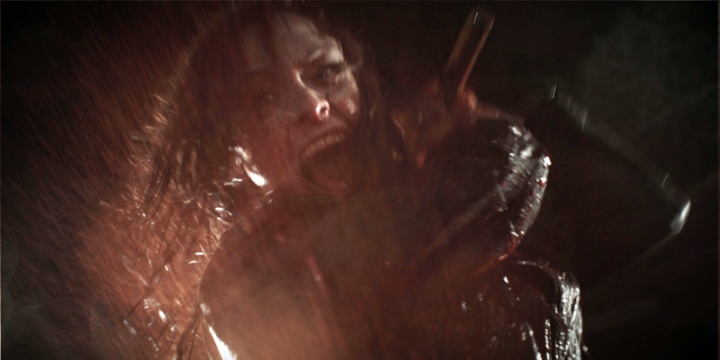 HATCHET II (2010) – Picking up at the very nanosecond HATCHET closed on, Marybeth (now played by HALLOWEEN series veteran, Danielle Harris) narrowly escapes the clutches of Victor Crowley. She is rescued by a local scavenger who leads her to the door of Reverend Zombie (Tony Todd, expanding his cameo from the first film into a full-on starring role). Marybeth is determined to go back to the swamp and destroy Crowley once and for all. The reverend tells the origin of Crowley, including the parts the locals don’t mention. He says that he may have a way to break the Crowley curse and assembles a group of bounty hunters for an expedition into the swamp. What the duplicitous Zombie isn’t telling Marybeth is that to end the curse requires a terrible sacrifice.

With HATCHET II, Green not only improves upon his perfectly good predecessor He delivers on every promise he made and more. The characters are much more interesting this time out, with nobody pissing and moaning about anything less important than not wanting to die. Green has also assembled an amazing cast. Kane Hodder plays both Crowley and Crowley’s father in the HATCHET films. And despite having virtually no dialogue, he does show that he’s more than just a stuntman. Hodder is an actor and HATCHET II proves that. Todd is fantastic as Zombie. This is the best we’ve seen him since the iconic CANDYMAN.

With no disrespect to the talented Tamara Feldman, it was also a brilliant idea to recast the part of Marybeth. Danielle Harris has never been better, and considering what an amazing actress she is, that’s saying a lot. She is spunky, feisty and strong but not so much that she isn’t horrified by what is going on around her.

Things happen quick and frequent in HATCHET II. Everything has been pumped up a few notches, particularly the tension and the thrills. HATCHET II is positively exhilarating A nice throwback to slashers of previous years? To hell with that. HATCHET II is one of the greatest slashers I’ve ever seen.  Yes, really.

HATCHET III (2013) – Much like the previous entry, HATCHET III picks up the very moment where HATCHET II ends, picking up mid-sound effect even. Marybeth then emerges from the swamp and shows up in a New Orleans police station, covered in Victor Crowley’s blood and carrying his scalp. When she tells her story, Sherri ff Fowler (Zach Galligan – GREMLINS 1-2, WAXWORK 1-2) is dubious, even commenting that going back into the swamp after the first night is something no one would be dumb enough to do. He sends his men out there, and what they discover is a massacre, with dozens of mutilated bodies. He goes out to join his men who also come against Crowley when the sun goes down. Meanwhile, the sheriff’s ex-wife (Caroline Williams – TEXAS CHAINSAW MASSACRE PART 2) has been studying the Crowley legend for years and – stop me if you’ve heard this one – knows the way to stop him. She takes Marybeth against her will into the swamp with the tools to take care of Crowley.

Adam Green opted out of directing HATCHET III, instead hand-picking his editor, B.J. McDonnell to make his directorial debut. And for the most part, McDonnell does a damn fine job. Just like the previous entry, HATCHET III moves at a brisk pace with characters we root for but who wind up getting ground up like chuck anyway.

Harris is great once again and it’s awesome to see Galligan and Williams back in action. The script has a few too many holes which makes this not quite the slam dunk as HATCHET II. However, the fact is that it’s another winner, in a big, big way.

HATCHET is currently the best horror franchise out there. Who knows if the saga of Victor Crowley will truly end with this third installment or whether he’ll continue to stalk the swamp in 2016. If the story ends here, then it’s a fitting capper to the trilogy. But should Victor Crowley emerge once again, count me in.